We have been so busy that I am having trouble keeping track of everything we have been doing. Today was pretty incredible though. It was a lazy day and we started late. Eventually we got out rock climbing. As we head south from out house we probably have one hundred climbs within 10 miles. We are out of shape, but it is sunny and we like being outside.

On the way home, we stopped to get some water. Obviously, we are smart enough to not buy bottled water, so we brought our bottle to the source. the locals are always here so we figured there was a reason. Turns out, it is pretty good.

On the drive home, we saw people pulled over and look into Turnagain Arm. A pod of beluga whales were feeding on salmon with their friends the seals. We sat on the side of the road and watched this sunset and admired the whitest whales we have ever seen.

Boom. Just like that I am one year away from being an RN. It has been one hell of a quarter. From me breaking my neck to Amanda needing an emergency appendectomy. Somehow, we got through it and occasionally had some fun.

We had a sunset kayak with Mount Rainier majestically looming in the background. This was just a couple of days before Amanda was doubled over in pain and we took her to the ER.

I found my new favorite creek that is close to Seattle. This was the fish of the day.

Summer has begun and I plan on doing lots of fun things that do not involve nursing school. Thanks for following along.

I found a new little piece of heaven. Only an hour away from the house there is a lake full of fish. There are dogs off leash (don’t tell anyone). Nobody is there during the week. There was one canoe on the lake, mine. For the first 3 hours, there was a bit of wind, lots of paddling, and no fish. It was getting frustrating. I have been fishing (for trout) all winter and not catching much. I have been fishing for steelhead all winter and not catching anything.

I had actually called it a day and we were paddling in to shore when with reluctant optimism, I stopped paddling. There was a small disturbance on the surface. The wind had died. The temperature had dropped. The fish were rising. First just a couple. Then like a switch they were all over the place. The air was full of big mayflies. Just like in the books, they looked like they were depositing eggs on the surface of the water. Maybe they were emerging from down below. They looked huge. Like a size 8 huge. I tried a dry, but no luck. Then an emerger that I knew would work. It didn’t. I went back to what I called the Boulder Creek special. It is technically something that looks like a caddis pupa. Brown thread, maybe some copper wire for a segmented body, and a bit of hackle behind a bead head. Magic. Got a couple of fish before the rains came.

The snow covered mountains started disappearing behind giant clouds of rain and snow. The first drops started falling as we finished loading the canoe on the car. Great day! 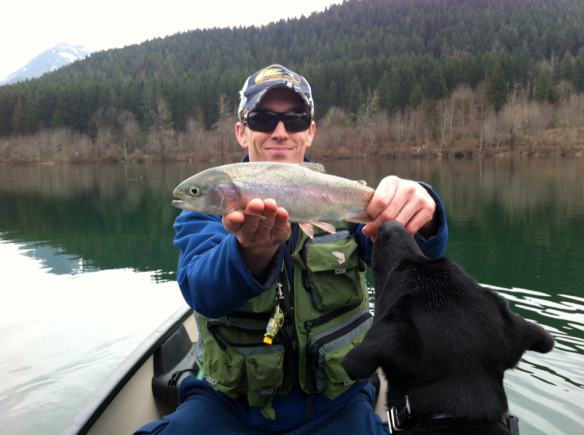 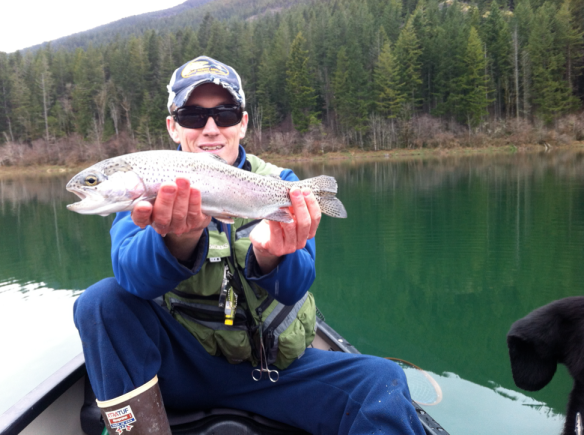